Both caveat and legal notice are legal documents but are strikingly different from each other. While a caveat is filed to protect oneself against an expected application filed by another party, a legal notice is a document sent to the party of opposition before proceeding with legal action against them.

Civil lawsuits are very elaborate and complicated as it involves several circumvented procedures. It accommodates various types of documents, legal applications, petitions, etc. In a civil suit, the first step is to file the required documents before the court, during which the copies of such documents are shared with the parties of the opposition. Two such documents that are predominantly filed in civil suits are the caveat petitions and legal notices.

What is a Caveat Petition?

The word Caveat has its origin in Latin, which means ‘let a person be aware’. A Caveat petition is explained under Section 148A of the Civil Procedure Code, 1908. The person filing the caveat is called the caveator. A caveat petition is defined as a precautionary measure taken by individuals when they are apprehensive of some legal action being taken against them in any matter.  In law, the caveat acts as a formal notice wherein the caveator is always intimated before any legal action is instituted. By doing this, the caveator ensures that the court will hold a reasonable hearing before taking any decisions on any case brought against the caveator. A caveat is therefore more like a warning message.

The main purpose of the caveat is to convey to the third party the caveator’s vested interest in the subject matter. The caveat petition is valid for a period of 90 days from the date of filing the petition. This implies that the court is not under any obligation to notify the caveator on any course of action of the opposition after the stipulated period. A fresh caveat may be filed again after the expiry of 90days.

What is a Legal Notice

A legal notice is filed under Section 80 of the Code of Civil Procedure, 1908. It has to be borne in mind that legal notices are filed only in civil cases. A legal notice is a plain legal document that delineates the issue in question and the relief the plaintiff seeks within a specified time frame. Legal action can be pursued only after a notice has been served upon the party of the opposition. The serving of the legal notice initiates the process of legal proceedings in the court as it acts as an official communication between the parties. The legal notice serves as an instrument to inform the party’s intention to pursue legal action against the opposition.

A caveat is usually filed by an individual claiming legal rights to appear before the Court. This is done during instances wherein an application is expected to be made against the said individual or when such an application has already been made in a suit or a proceeding that has been instituted or that is going to be instituted in the near future. A legal notice contains information such as statements and facts related to the grievance for which an action is being sought, alternatives or relief solicited by the grieving party, and details of how the problem at hand can be resolved.

A legal notice is a simple document that includes the facts of the case precisely along with the relief sought out. A legal expert can help in putting forth the legal notice together as per the prevailing law and can draft it accordingly. It is thereafter sent to the concerned party through registered post or can be handed over personally.

Details to be Enclosed

A caveat petition should have the following details in it:

A legal notice should encompass the following details

Differences between Caveat and Legal Notice

The caveat undoubtedly acts as a boon to the public, as it serves to secure the interests of the caveator. A legal notice, on the other hand, notifies the opposition of the grievance and offers them the necessary time frame to handle the issue. Both the legal instruments play a vital role in reducing the multitude of cases being filed before the court.

How Can a New Employee in India Register with ESIC?

ESI, or Employees’ State Insurance, is unquestionably one of the most promising employee insurance and social security programs. The Union… 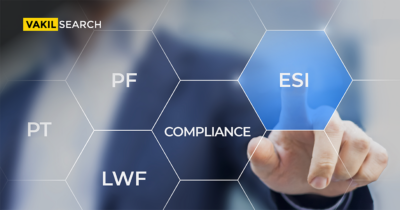 How Can I Edit My ESIC Details Online?

The ESIC Registration Act was passed in 1948, and it deals with the security of employees and their family members.…