Now you can read this page in Hindi.Change to हिन्दी

How does GST registration work for you?

We help you get a Secure GST Identification Number.

We make it easy for you to get your GST from the comfort of your own home.

We will file your returns and complete all other compliances as and when required.

Launched on July 1 2017, the Goods & Services Tax (GST) applies to all Indian service providers (including freelancers), traders and manufacturers. A variety of Central taxes like Service Tax, Excise Duty, CST and state taxes like Entertainment Tax, Luxury Tax, Octroi, VAT are absorbed in one tax – GST, implemented on 01.07.2017.  GST is to be charged at every step of the supply chain, with full set-off benefits available. The procedure for GST is entirely online and requires no manual intervention.

Every product goes through multiple stages along the supply chain, which includes the purchasing of raw materials, manufacturing, sale to the wholesaler, selling to the retailer and then the final sale to the consumer. Interestingly,  GST will be levied on all of these 3 stages. Let’s say if a product is produced in West Bengal but is being consumed in Uttar Pradesh, the entire revenue will go to Uttar Pradesh.

Also, taxpayers with a turnover of less than Rs.1.5 crore can choose composition scheme to get rid of tedious GST formalities and pay GST at a fixed rate of turnover. 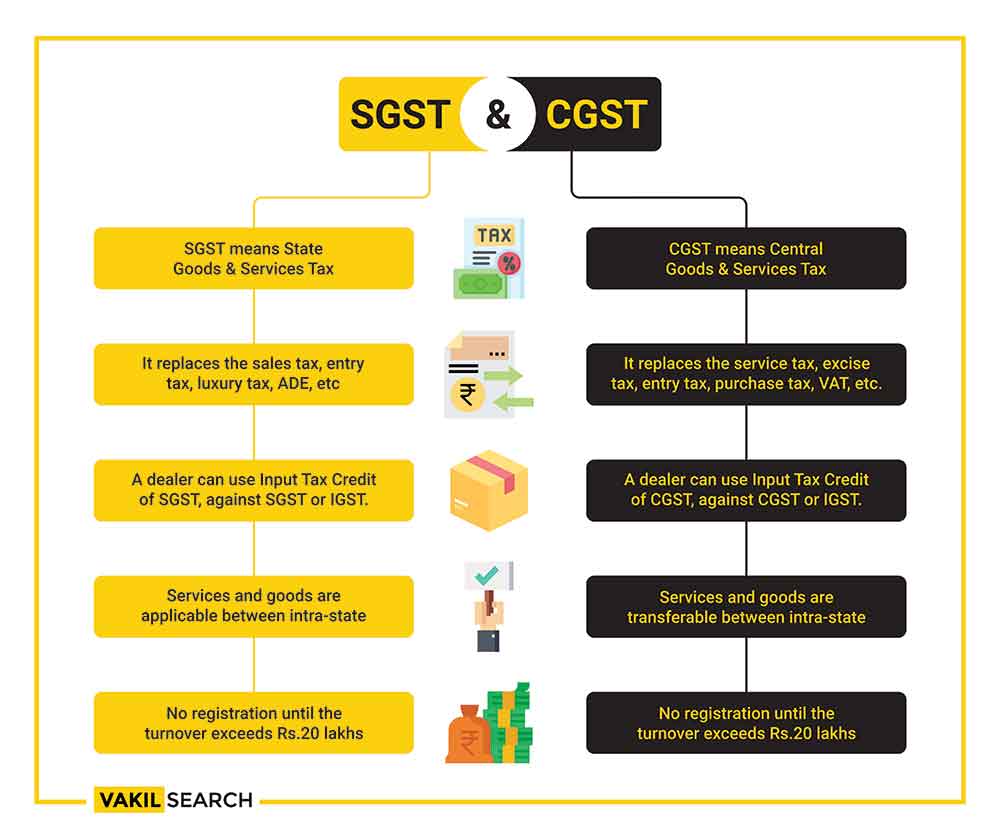 What are the components of GST?

What is the input tax credit?

Input tax credit lets you reduce your tax you have already paid on inputs and pay the remaining amount at the time of paying tax.

You pay taxes on the purchase when a product is purchased from a registered seller, and when you sell the product, you too collect the tax. With input credit, you can adjust the taxes paid at the time of purchase with the amount of tax on sales (output tax) and pay the balance liability of tax, i.e. tax on sale minus tax on the purchase.

Who needs a GST Registration?

Also, as per the recent notification, e-commerce sellers/aggregators need not register if total sales are less than Rs.20 lakhs.

What are the GST tax rates?

You can see the tax rates for all the products here: https://cbec-gst.gov.in/gst-goods-services-rates.html

Check out the GST calculator which comes in handy to calculate the Goods and Service Tax using different slabs.

What is a GST Return?

A GST Return is a document containing details of income that is required to be filed as per the law with the tax authorities. Under the GST law, a taxpayer has to submit two returns on a monthly basis and one such return annually. All returns have to be filed online. Please note that there is no provision for revising the returns. All invoices for the previous tax period that went unreported must be included in the current month.

Under GST, a registered dealer has to file GST returns that include: Purchases, Sales, Output, GST (On sales) and Input tax credit (GST paid on purchases).

GSTIN is a unique identification number given to each GST taxpayer. To verify a GSTIN number a person who has a GST number can log onto the GST portal.

What is the GSTN (Goods and Service Tax Network)?

The Goods and Service Tax Network (or GSTN) is section 8 (non-profit), non-government, private limited company. GSTN is a one-stop solution for all your indirect tax requirements. GSTN is responsible for maintaining Indirect Taxation platform for GST to help you prepare, file, rectify returns and make payments of your indirect tax liabilities.

The list of documents required for registration of GST for various business are as follows:

The following can be shown as proof of address of a director:-

One of our GST representatives will collect all the required documents and process the GST application through the iCFO platform.

Once all the documents are collected, the application will be processed and filed. Then immediately the ARN number will be issued.

Penalties For Failure To GST Registration

As per the Section 122 of the CGST act, in India, there is a direct penalty for all those taxable persons who fail to register for GST.

Voluntary Registration Under GST (for Companies With A Turnover Below Rs.20 Lakhs)

Any small business with turnover less than 20 lakh can voluntarily register for GST even though it is not compulsory by law. Voluntary GST registration has its own advantages and some of them are:

A GST Return Filing is a return document that contains details of the income of the taxpayer. It has to be filed with the GST administrative authority. The document is used tax authorities to calculate the tax liability of a GST taxpayer. A GST Return Filing form has to include the following details.

For filing a GST Return, you need to have GST compliant sales and purchase invoices attached.

How can we help you? - Why Vakilsearch?

Some of the best reasons to choose us are:

Our legal representatives are available to explain the whole process and clear any queries you may have.

Although the GST portal has a user-friendly interface, the GST Forms have a lot of complex fields. Hence, it is highly recommended that you seek the help of a professional for submitting the application, the required procedures, filing your returns and completing other formalities in the portal.

GST Registration to be Granted after Physical Verification of Business Location, if Aadhaar is not Authenticated.

As per the latest notification (Notification no. 62/2020) issued by the Central Board of Indirect Taxes and Customs (CBIC), all businesses have to undergo a physical verification of location to be granted a GST registration, if they cannot provide their Aadhar for authentication.

09th August: The Andhra Pradesh bench of the Authority for Advance Rulings (AAR) has said coaching classes are not in the GST exemption list. 18% of GST will be imposed on this.

04th April: The Union Minister for MSMEs, has announced that MSMEs with GST registration would no longer need the Udyog Aadhar Number (UAN) for availing the Interest Subvention Scheme. The Scheme aims to provide incentives to MSMEs for registering under the GST regime.

The Global Launch Of Tally: Enables GST E-Invoicing By March-End

Please note that we are a facilitating platform enabling access to reliable professionals. We are not a law firm and do not provide legal services ourselves. The information on this website is for the purpose of knowledge only and should not be relied upon as legal advice or opinion.